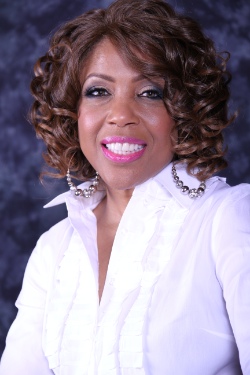 First Lady Horry is a mailwoman, a mouthpiece, and an ambassador for Christ. God has gifted her for the Body of Christ and told her she was created to praise Him, causing others to praise Him.  The manifestation of these instructions has been true since the very day she surrendered her life to the Lord, Jesus Christ.

Kathy was born in Battle Creek, Michigan, to a legacy of music. Her mother came from a musical family, and Kathy was raised singing and playing the piano at family and church gatherings and school events. She recorded her first gospel single at the age of nine and her first secular single at the age of 14. This single received a substantial amount of local air play, leading her family and friends to believe her success as a musician was guaranteed. However, it was not until a promoter with Polygram Records heard her sing (when she was 16) that she experienced her first real break in professional music. At the age of eighteen, she moved to Atlanta, Georgia, to pursue her dream of secular music, leaving gospel behind.

Kathy achieved success as a secular artist, recording two Rhythm and Blues albums, with accompanying music videos and plenty of airplay; and her singles climbed the Billboard Top 20 charts. Her return to gospel was precipitated by the death of her father causing her to realize that she needed to accept Jesus Christ as her personal Lord and Savior in order to stabilize her life. She was determined to follow the Lord, and in so doing, turned her back on a lucrative record deal that promised to fulfill all her dreams of success and stardom. Once she made up her mind to follow the Lord, the taste for secular music was burned from her mouth forever. She lives now to sing God’s praises for the rest of her life.

Kathy moved from Atlanta, Georgia, to Temple Hills, Maryland, where she became the Praise and Worship Leader under the leadership of Pastor John Cherry at AME Zion Full Gospel Church, now known as From The Heart Church Ministries.  She was promoted to the position of Director of Music when Minister Danni Belle Hall went home to be with the Lord, and Kathy remained at From The Heart Church Ministries for several years. Kathy earned her Bachelor’s Degree in Music and Psychology at the University of Maryland.

Kathy met Ray as he volunteered in the Music Ministry.  In 1999, they decided to enroll in the pre-marital class at From The Heart Ministries. Pastor Cherry, who recognized the call on both their lives, wanted to make sure, to the best of his ability, they were prepared for the journey ahead.  After extensive counseling, Pastor Ray and Minister Kathy Horry finally wed on September 28th, 2001, in San Diego, California, at a marriage retreat held by From The Heart Church Ministries.

In June, 2006, Minister Horry fully supported the “God in her husband” as he obediently began the Ark of Safety Christian Church.  Minister Horry is currently the Minister of Music where she leads the congregation to the throne room as their hearts are prepared to receive the Word of God from the vessel of her husband, Pastor Raymond D. Horry. They are a dynamic team for God in the St. Charles, Missouri, area; and they are the “thankful” parents of Raymond, Jr., Raynard, and Witney.

Minister Horry has previously recorded five gospel CDs: “Faith,” “A Safe Place,” “It’s Harvest Time,” “From Grace To Glory” and “Sanctuary” where she is featured with the Ark of Safety Christian Church Choir. Her latest Christmas holiday project, “The Gift,” was released on September 12, 2010.  Additionally, she has published her autobiography, also entitled From Grace To Glory.  For more about “First Lady Horry” you can visit www.kathyhorry.com

Service Times
Sundays - 9:00 am
Wednesdays - 7:00 pm
See our Events for other service times

Wednesday Night Live will continue to be held virtually at 7:00 PM Dismiss