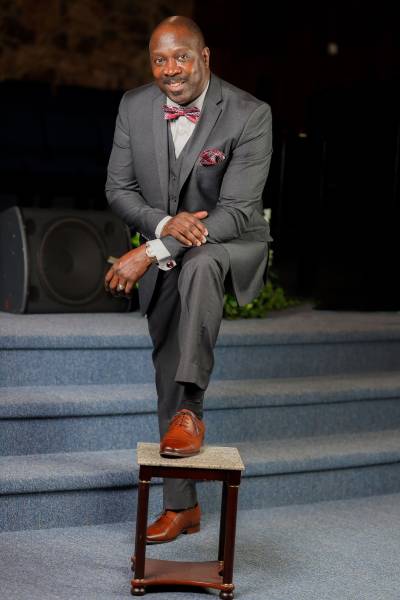 Raymond D. Horry was born on February 25, 1963, in Charleston, South Carolina, to Mr. and Mrs. Edward Horry, Jr.  Raymond grew up in church all of his life, and was told on numerous occasions by the mothers of his church that he had a gift from God that made others feel good about Christ.  Raymond accepted Christ at an early age, he thought, but he never really walked in the fullness of God.  He later found out that he was never saved at all, because he didn’t get saved according to Romans 10:9-10.

Raymond successfully graduated from High School, where his class voted him, “most intellectual,” and then he went on to graduate from North Carolina A&T State University, with a BS in Accounting.  Raymond traveled extensively with his career, until finally settling down in the Washington, DC, Metropolitan area.

While in the Washington, DC, Metropolitan area, Raymond became born again while watching an Ever Increasing Faith broadcast with Dr. Frederick K.C. Price.  Raymond was aware that he had a call on his life from God to preach the gospel, but he ignored the call, because he was afraid of the responsibility.  He continued to grow and develop in the Lord, by the Holy Spirit, and under the leadership and authority of Pastor John A. Cherry of From The Heart Church Ministry.

Raymond worked in the Music Ministry at From the Heart Church Ministry, where he met his wife, then Kathy Myers, who was the Director of Music at From The Heart Church Ministry.  The couple enrolled in the pre-marital class at From The Heart, where they remained for over a year and a half.  Pastor Cherry kept them in the class for so long, because he recognized the call on both their lives and he wanted to make sure, to the best of his ability, that they were prepared for the journey ahead.  The couple agrees that the time and the class were well worth it.

The couple finally wed on September 28, 2001, in San Diego, California, at a marriage retreat held by From The Heart Church Ministry.  The following year the couple’s assignment at From The Heart Church Ministry ended and God directed the couple to St. Louis, Missouri to St. Louis Christian Center.  Kathy was assigned as the Music Director and Raymond was assigned as the Youth Director.  Within a year’s time, the couple was ordained; Kathy as Minister of Music; and Raymond as Youth Pastor.  The Lord was not through, He again moved in the lives of the couple and promoted Raymond to the position of Assistant Pastor of St. Louis Christian Center.

Out of sheer obedience to our Heavenly Father, Pastor Horry began the Ark of Safety Christian Church in June 2006.  Although his thoughts were that of a small congregation, God once again proved His faithfulness to righteous living and blessed the church to grow to 550 members in less than 7 months.  The steady growth of the membership preempted the church leadership to proceed with the purchase of a $4.2 million dollar facility in St. Charles, Missouri.  Pastor Horry’s focus is on teaching the uncompromised word of God and living an exemplary lifestyle as a Christian walking in righteousness and full of integrity before God’s people.  He strives to bring to the forefront that holiness is right!  In December 2010, he released his first of many books inspired by God, “The Marriage Cup and The Covenant.”

The couple have embraced full time ministry and the faithfulness of God, while they continue to operate the ministry that God has given them, “Prayer and Praise Ministry,”  the teaching and singing ministry of Raymond and Kathy Horry. The couple now resides in the St. Louis, Missouri, area and is the proud parents of two sons, Raymond, Jr., Raynard and one daughter, Witney LaTrice.  God has truly blessed this couple and they believe that the best is yet to come.  They have dedicated their lives to the teaching and singing of the gospel.  To God Be The Glory!

Wednesday Night Live will continue to be held virtually at 7:00 PM Dismiss